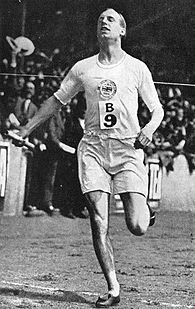 The story of these two athletes, along with other members of the British athletics team, was dramatised in the movie Chariots of Fire (an inspirational story worth watching) which took some licence with the facts to create a memorable film.

The 1924 Summer Olympics were hosted by the city of Paris. A devout Christian, Liddell refused to run in a heat held on Sunday (the Christian Sabbath) and was forced to withdraw from the 100-metre race, his best event. The schedule had been published several months earlier, and his decision was made well before the Games. Liddell spent the intervening months training for the 400-metre race, though his best pre-Olympics time of 49.6 seconds was modest by international standards.

On the morning of the Olympic 400-metre final, July 11, 1924, Liddell was handed a folded square of paper, a gift from one of the team masseurs. Reading it later he found the message: “In the old book it says: ‘He that honours me I will honour.’ Wishing you the best of success always.” Recognising the (slightly misquoted) reference to 1 Samuel 2:30, Liddell was profoundly moved that someone other than his coach believed in him and the stance he had taken.

The 400-metre had been considered a middle-distance event in which runners raced round the first bend and coasted through the back leg. Inspired by the Biblical message, and deprived of a view of the other runners because he drew the outside lane, Liddell raced the whole of the first 200 metres to be well clear of the favoured Americans. With little option but to then treat the race as a complete sprint, he continued to race around the final bend. He was challenged all the way down the home straight but held on to take the win. He broke the Olympic and world records with a time of 47.6 seconds.

A sprinter and long jumper since his youth, he continued to compete in running while at Cambridge. He earned a place in the 1920 Olympic team, but was eliminated in the quarter-finals of both the 100 m and 200 m, and finished 20th in the long jump. He was also part of the British relay team that took fourth place in the 4 × 100 m.

Although Abrahams dominated British long jump and sprint events, after graduating from Cambridge he employed Sam Mussabini, a professional coach, who improved his style and training techniques in preparation for the 1924 Olympics in Paris, France.

For six months, Mussabini at Abrahams’s direction emphasised the 100 m, with the 200 m as secondary. Through vigorous training, Abrahams perfected his start, stride and form. One month before the 1924 Games, he set the English record in the long jump 24 feet 2 1⁄2 inches (7.38 m), a record which stood for the next 32 years. The same day he ran the 100-yard dash in 9.6 seconds, but the time was not submitted as a record because the track was on a slight downhill.

At the 1924 Summer Games, Abrahams won the 100 metres in a time of 10.6 seconds, beating all the American favourites, including the 1920 gold-medal winner Charley Paddock. Both Liddell and Abrahams competed in the final of the 200 metre race, however, with Liddell finishing third and Abrahams sixth. Liddell went on to win the gold medal in the 400 metres. As an opening runner for the 4 × 100 m team, Abrahams won a second Olympic medal, a silver. He did not compete in the long jump.